Founder and Director of Stadium

A design-driven development, Fenwick Lane consists of eight new compact homes in Brooklyn, a suburb on the doorstep of Cape Town’s CBD.

Development on Fenwick Lane has been scheduled to start early next year with completion by the end of 2021.

We sat down with Gareth Pearson, founder, and director of Stadium to discuss their latest innovative project.

Brooklyn is an interesting choice. What attracted Stadium to the suburb and how do you believe the area and this project will complement each other?

The aim of this project was always to build well-designed, well-located homeownership opportunities. When looking at Cape Town’s inner suburbs, we found that areas like Woodstock and Observatory do not have much developable land and where there are opportunities, land is expensive in a competitive market.

We kept coming back to Brooklyn because of its location. Even though it is right on the doorstep of the CBD, it has a suburban quality to it that you do not find in areas like Woodstock. We ended up finding a vacant site in the quieter south western part of Brooklyn, a short walk from the dedicated MyCiti BRT bus route. The City of Cape Town’s policies advocate for density and development close to public transport corridors which is exactly what this project achieves. It pursues a greater degree of density while still providing the amenities one looks for in a suburban home and one has access to safe, reliable public transport with the MyCiti bus service. It starts to make more sustainable transport options a lot more viable.

The design is extremely efficient and flexible, and it is aesthetically pleasing and modern. Can you walk us through the design thought process and the architectural brief?

The site we settled on is made up of three separate erven, each under 200 square metres in area. This meant that the building’s set back line would only be one metre from the street boundary.

We explored a few ideas for a scheme with six units around a central courtyard while still building within the footprint of each erf. The whole idea was to build within our existing rights and to not have to go through any rezoning, consolidation, or subdivision processes.

Wolff Architects ended up coming up with a design that was very different to the initial idea but one that felt like a more appropriate response to the constraints of the site. Wolff are known for designing functional buildings and they have certainly done this with Fenwick Lane. 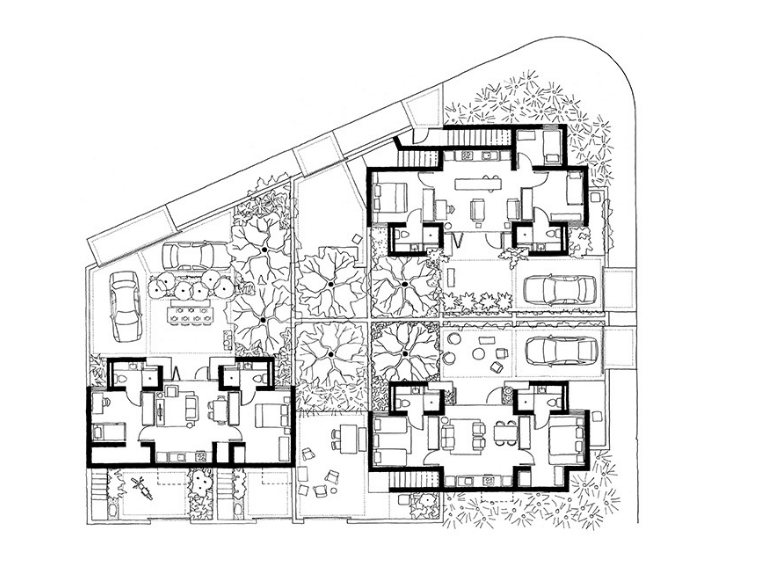 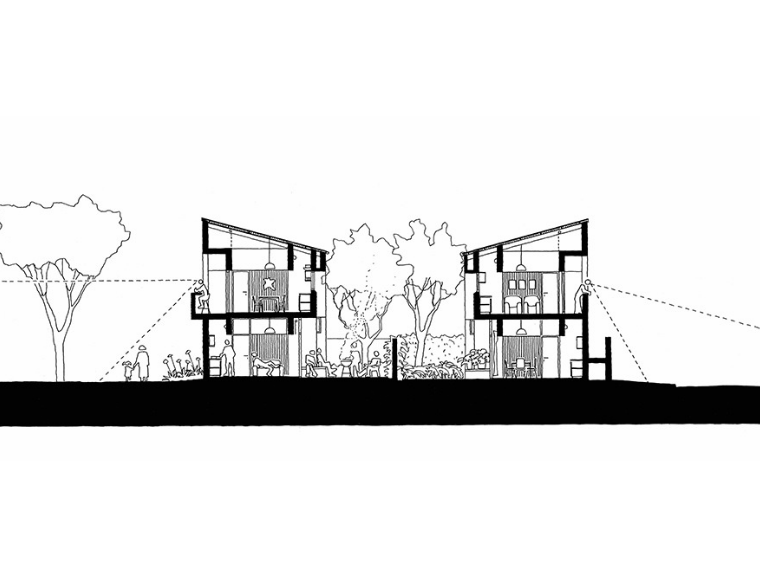 There are a few innovations in the design mainly the flexibility of space, the privacy of the individual units and maximum space utilization. Talk us through this.

The scheme includes three buildings with a repeated floor plan consisting of a unit on the ground floor and a unit on the first floor. Each unit has a central living area with two adjoining bedrooms and bathrooms. The main idea behind this floorplan is to allow for adaption and future subdivision. Everyone has different housing needs and these needs change over time.

A two-bedroom unit could become a one-bedroom unit with a much larger living area or a home office, for example. There is a connection to the living area, but one has that extra room which may not be needed as a bedroom or, in the long-term, this second bedroom could become a self-contained unit with its own front door. Six homes could quite easily become twelve homes. One of the units has a third room that could easily become a corner shop or hatch down the line.

The other particularly interesting feature in the design is the orientation of the units. The ground floor units open onto their private yards while the upper floor units face the opposite direction, overlooking the street. We can achieve a degree of density on this compact site while still retaining privacy for the residents.

As for space, while these homes are relatively compact, they have a generous spatial quality to them. The ground floor living areas extend out onto their outdoor yard spaces and the upper floor units have high ceilings with a pitch of almost four metres. Most of the units have lots of storage space with the upper floor units featuring a storage mezzanine level.

It is also worth mentioning that almost every unit has its own yard, even the upper floor units. We want these homes to appeal to the kind of buyer who would otherwise be looking for a freestanding house with a garden and after lockdown, I think everyone has a new appreciation for outdoor space.

Who do you envision living in these units?

We have always had first-time homeowners in mind but more importantly, we wanted to build something for owner-occupiers. There are some really interesting examples of new developments that only sell to owner-occupiers as a necessary response to an inflated investor-centric housing market. I think this is certainly relevant in Cape Town’s inner suburbs which have become increasingly unaffordable. Owner-occupiers also bring value to a community – they are more inclined to be invested in their property and the surrounding neighbourhood.

While we are not going to exclude buy-to-let investors from purchasing at Fenwick Lane, we will be giving priority to owner-occupiers. The majority of interest we have received so far has been from first-time homeowners, so we are on track.

More specifically, we imagine the buyer profile being people who want the amenity of a suburban home but without having to spend hours in traffic and who value design quality and the sense of community that comes with living in this kind of cluster development. Ideally, we would want a mix of tenants in different life stages and from different sized households, but this is not for us to decide.

I would like to think that in developing a building, we are making a piece of the city and not a generic piece of property that lives on a balance sheet. It is something real that has use-value – utilized by different people in different ways. We are quite excited to see who those people will be.